Was anyone else besides me totally obsessed with this Royal Wedding thing on Friday (and Saturday and Sunday)?!

Initially, I thought the whole thing was "no big deal". I didn't even think I would watch any of it.

Then I slightly changed my mind and decided I would at least DVR it - just in case I wanted to check out "the dress" or something.

Then Joey was gone all weekend (playing paintball with friends), leaving me alone with the TV and DVR. I starting watching this wedding ordeal about 7 pm Friday evening . . . . and I could not get enough of it. I was hooked.

The wedding ceremony details in and of themselves were enough to grab my attention for the full 4 hours (the ceremony was beautiful), but I also love European history, and so while I was watching the wedding on TV, I was at the same time reading through the official website of The British Monarchy. 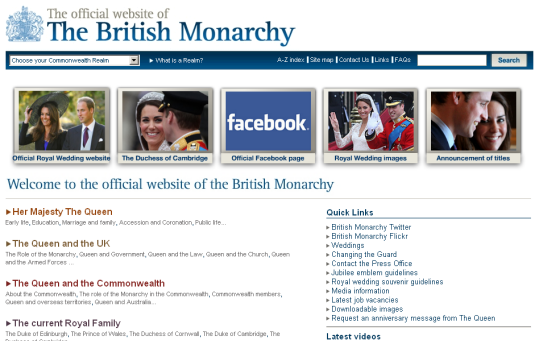 The website includes all the facts regarding the history of the British Monarchy and its traditions. It answered many of my questions: What is a Duke? an Earl? a Countess? Who is "so and so" in relation to the Queen? Why isn't Queen Elizabeth's husband called "King"? What do these people do all day? Who lives in which castle? Who is related to whom? (I'm slightly nosey.)

The website also includes little peeks into the Castles and Palaces owned by the monarchy. And if you don't know by now, I'm a teensy bit obsessed with houses of any kind. Bring a castle into my view, and I just might go nuts. The sheer size of these castles alone is enough to boggle my brain, but then you add the architectural and historical details of these residencies and I die.

The website gave the most information about Buckingham Palace, and that's what I'm going to share with you today. So, if you're not interested in castles, you can stop reading here. Otherwise continue...

For much of the year, Buckingham Palace is used by The Queen and members of the Royal Family for official functions and events. The State Rooms of the Palace are open to visitors during the Annual Summer Opening Her Majesty is in residence at Balmoral Castle.

1. The Grand Staircase: Designed by the architect John Nash for George IV, the staircase was augmented by Queen Victoria when she added portraits of her immediate family. 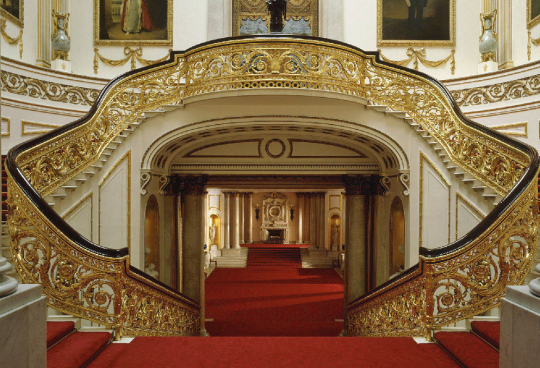 The dome, which allows daylight into the Grand Staircase, consists of 40 panes of glass, engraved and etched by the firm of Wainwright. 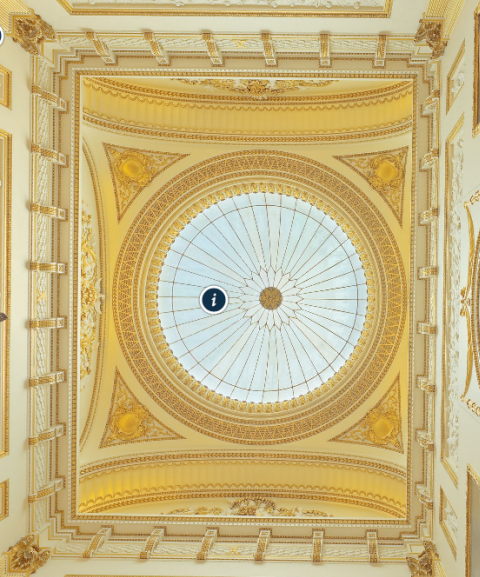 The decorative scheme of white and gold was introduced by King Edward VII soon after his accession in 1901. The plaster decoration, including the reliefs of the Four Seasons, were designed by Thomas Stothard. 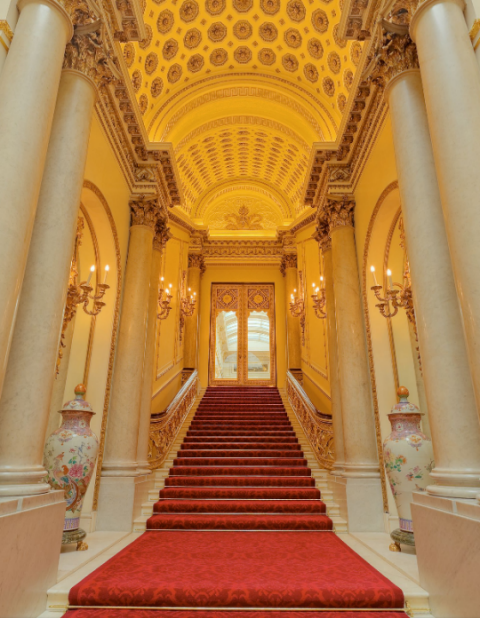 Queen Victoria had full-length portraits of her immediate family fitted into the walls of the upper part of the stairs; these include her parents, the Duke and Duchess of Kent and her predecessor to the throne, William IV and his wife, Queen Adelaide. 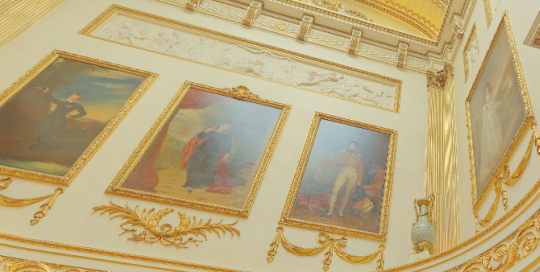 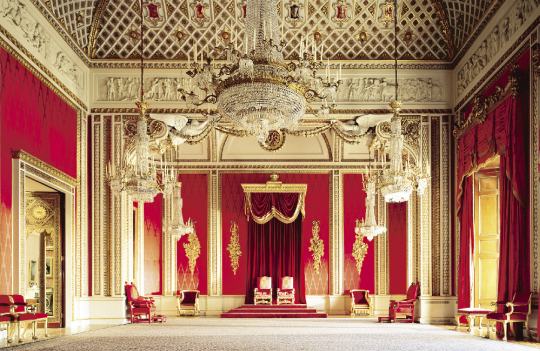 3. The Blue Drawing Room: George IV intended this room as a ballroom, but it was superseded in that function by Queen Victoria’s Ballroom in the south-west wing of the Palace. The room is 21 metres (68 feet) long and divided into bays by giant Corinthian columns. The blue flock wallpaper now in the room was hung by Queen Mary in the early twentieth century, while the Corinthian columns were re-painted to resemble onyx in the reign of Queen Victoria. 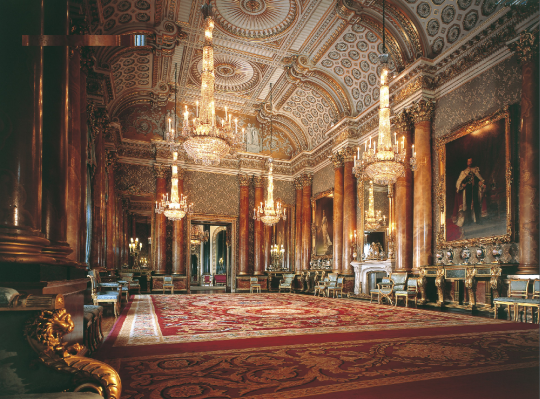 4. The White Drawing Room: The room is used for receptions and audiences and has been used as the backdrop for a number of formal photographic portraits of members of the Royal Family. John Nash reserved one of his most original ceiling designs for the White Drawing Room. 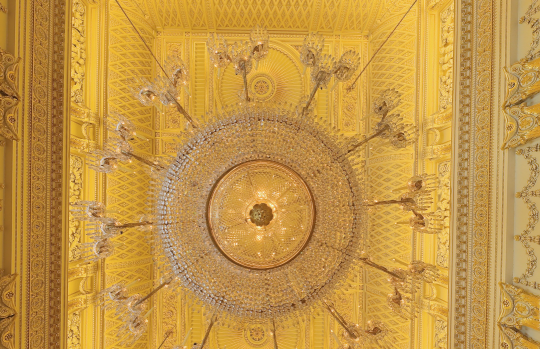 At each end of the room two pairs of ebony-veneered cabinets with gilt-bronze mounts are built into the wall beneath tall mirrors. One of them is incorporated into a concealed door . When opened, the mirror and cabinet open as one to to provide members of the Royal Family with a discreet means of entering the state rooms from the private rooms beyond. 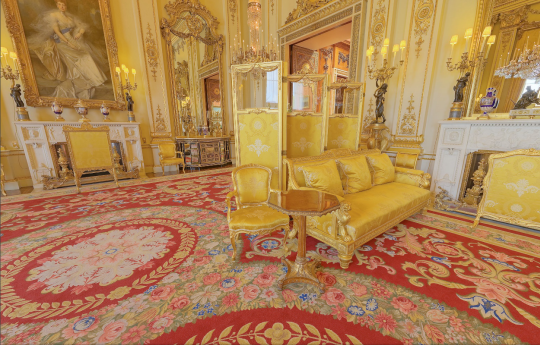 5. The Green Drawing Room: No information about this room on the website, but I like that you can see the Thrones Room through the doors. 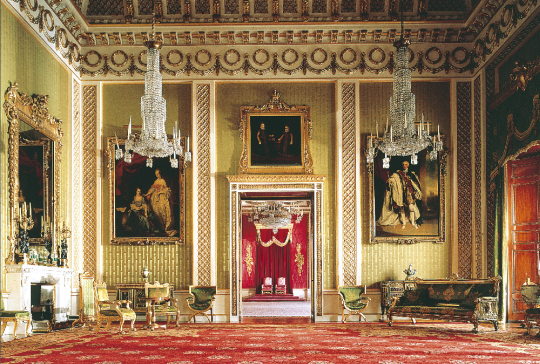 6. The State Dining Room: I counted and I think there are 24 chairs around the table. That would be great for nice family parties! 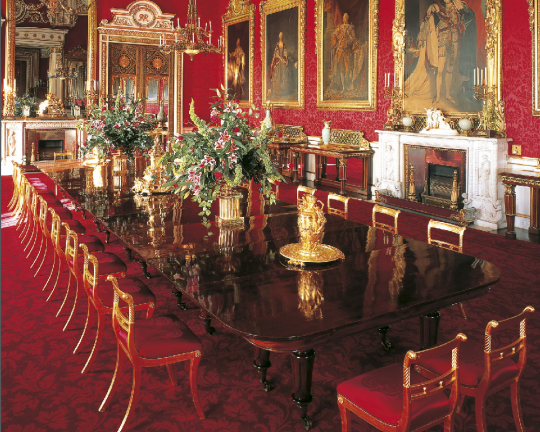 Does this interest anyone else as much as it does me?

Holla if you want to see more!

Oh, and to check out virtual views of these rooms yourself, click HERE.