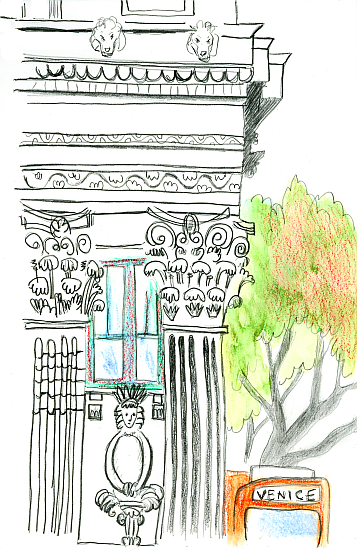 So it’s back to sunny southern California to draw again. I started a project in the spring and finished it this summer. The project was to draw on location in Downtown Los Angeles. Our daughter and her husband moved here last year, and we’ve been captivated by the beautiful historic architecture and the vibrancy of the area. I thought a total of 50 drawings would tell the story of this fascinating part of the city called DTLA.  Here are a few, and you can see them all in an upcoming book.
My first day, I left the apartment very early...still on East Coast time. I sat on a stool at the Starbucks around the corner at 6th and Spring Street. And this was my view.
The building was probably once a bank. The morning sun caught all the details of the Corinthium style columns.
You can take that orange bus all the way to Venice, Venice Beach that is. 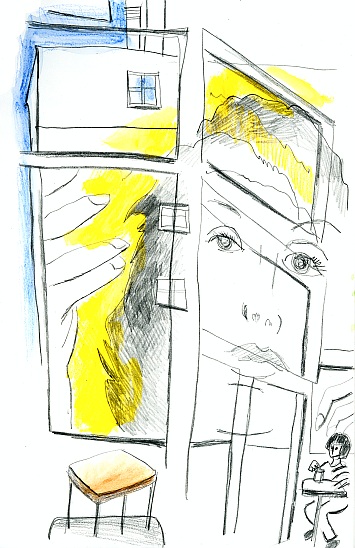 By turning my head about 90 degrees at the coffee shop, I got this view. DTLA is full of murals, mostly of very large faces. The painting is on the side of a renovated building full of loft apartments for the young professionals who are flocking to the area.
I always felt a little unnerved by this huge face peering in. 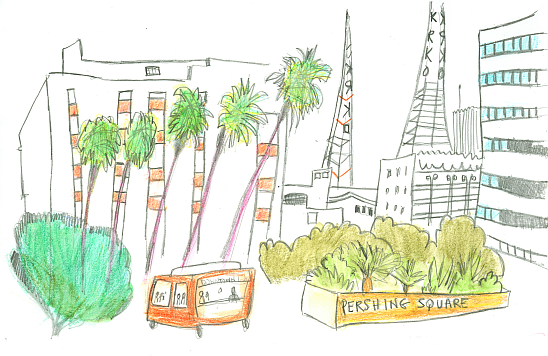 Pershing Square is a mixed use park a few blocks from our daughter and son-in-law’s apartment. It is surrounded by Beaux Arts and Art Deco buildings. The time frame for them is the 1920s and 1930s. In this drawing I was more interested in the antennas for KRKO.
Being a northerner means I don’t understand palm trees, but they appeal to me as a pattern. 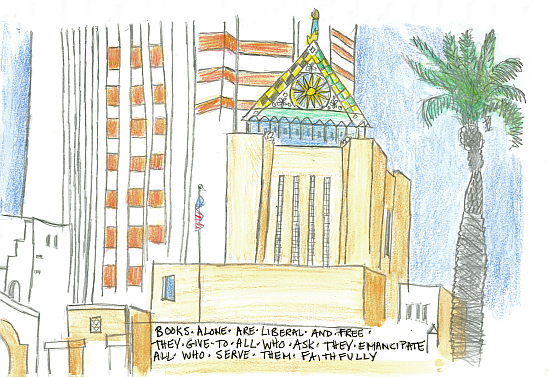 Still on my first day in LA, I climbed halfway up the Bunker Hill steps to get this view of the City Library tower. It is dwarfed by taller buildings now, but lovely in its Art Deco style. The top pyramid is covered in colored and gold mosaics that glint in the sun.
I am still trying to understand all the different kinds of palm trees. 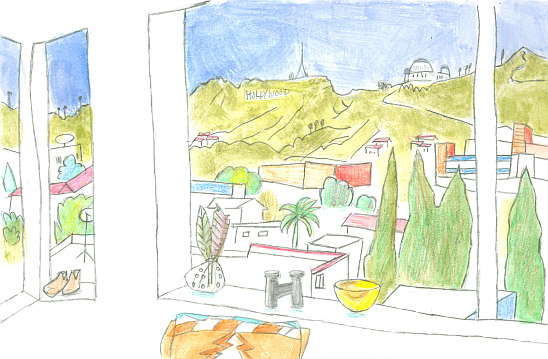 This is not Downtown Los Angeles, but it includes an iconic view that is sometimes visible from the downtown. In the center background is the famous Hollywood sign, and to the right of that is the Griffith Park Observatory. 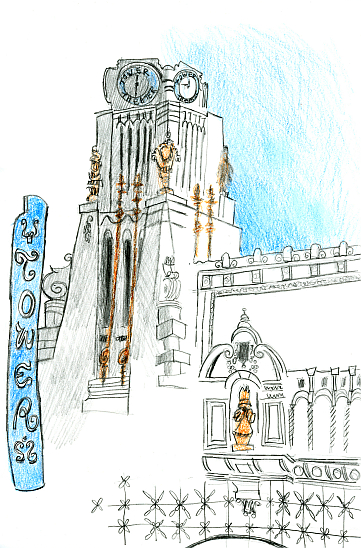 The Tower Theater at Broadway and 8th. The many theaters on Broadway have Art Deco motifs all mixed in with Mexican/Aztec/Central American ones. This one is all terra cotta and glazed tiles.  Most of the theaters have been well preserved, and while not open for regular operation often serve as the venue for receptions, award presentations, TV and movie shoots, and the like.
It was hot as blazes while I squinted up at this white building and then down at my white paper. 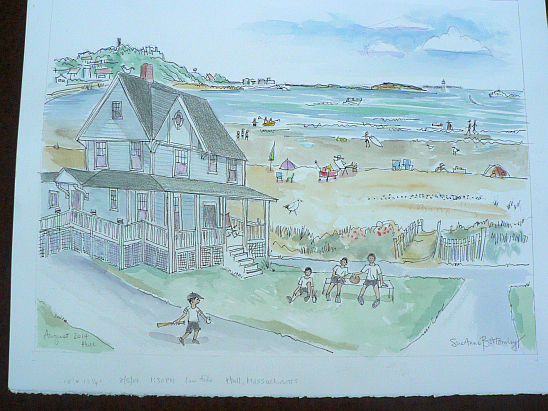 Last month I was asked to go to the South Shore of Boston to the beach town of Hull. My commission was to draw/paint the 100 year old house and the beach, and to include four young brothers who weren’t there at the time.
Timing was very tight between the day I painted this and delivery (the client’s wife’s birthday), and so there was no time for a professional photograph of the finished piece. So I have this very bluish image of white paper to post here.
There are all sorts of crazy perspectives going on here. My goal was to feel as if I were walking over the dunes and seeing the whole horizon open up. I sat on the bee-yoo-tee-ful beach for an hour and a half studying all the colors, the boats and ferries, all the people and their beach toys, even moving the land forms into a better composition.
I took photos of the house to help me work on the details at home. The four boys also had to be done at home from a compilation of a handful of photos provided by the client. In the photos, the boys were all on the porch, so you can see that I had to make major modifications.
It was all a secret as these things usually are. And I was told that it was a big hit. 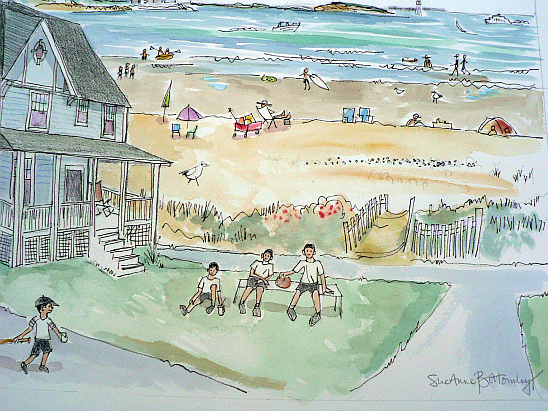 And here’s a nicer exposure of a closeup of the beach and the boys. 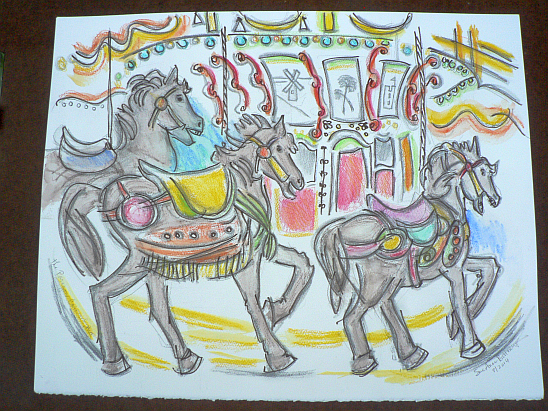 And while we were in Hull I drew this carousel, the last remaining relic of Paragon Park, the old Nantasket Beach amusement park. It was also a request from the same client. To add to the challenge, I drew the horses as they were spinning around. Fun. I love carousels.
The carousel has been housed in its own building and lovingly preserved by a non-profit organization. It’s still fully functional. Individual horses are sponsored by generous donors, either annually or in perpetuity. 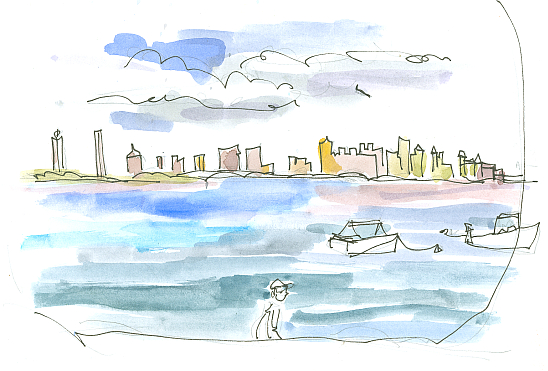 And on the way home from Hull the road to Boston unexpectedly turned left, we continued straight, and we ended up on Hough’s Neck, a short peninsula in Quincy with this view of the Boston skyline.
I didn’t even get out of the car, and I had it down on paper in minutes, including part of the car’s windshield. You see an airplane heading right into Logan Airport. It is one of those exciting and scary airports nearly surrounded by water. 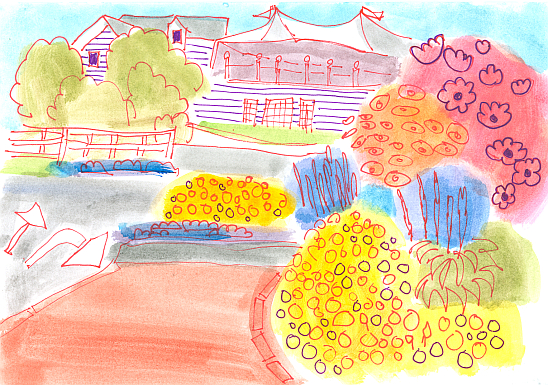 Last week was our wedding anniversary. For the second year in a row, we had a very nice brunch at Lakeside Grille at Church Landing in Meredith, NH. On our walk afterwards, I drew some end-of-summer lush gardens.
I was purposely emulating another artist’s style here, Reuven Dattner from Israel. I don’t know him. He posts online daily, and I enjoy following his work. It was very entertaining to draw with red and purple gel pens. The watercolor was added at home.