This weekend was a busy one - finishing up some last minute decorating for Christmas and the longer winter season.

Our master bedroom has been somewhat neglected in the decorating process for the last few months, and I felt some bedroom decor love was finally in order.

Decorating the bedroom was prompted in part by the fact that a bookcase, which had been sitting in my dining room, was moved out of the dining room when I did that decorating last week, and with no specific place to put the bookcase, I decided to move it to the master bedroom.

This ended up being a good idea because our bedroom walls were pretty bare and needed some attention. Also, this particular bookcase is one that Joey built for me when we first got married, and so, I enjoy I having this special piece in our room. And while the bookcase will mostly serve the practical function of holding our growing collection of books, I wanted to dress it up a little bit for the winter season.

I had actually hung the 2 pictures on the wall a few days before I decided to bring the bookcase into the room. Thankfully, since the frames were centered on the wall, they were mostly centered above the bookcase too. The frames contain a bride and groom portrait of Joey and I on our wedding day. 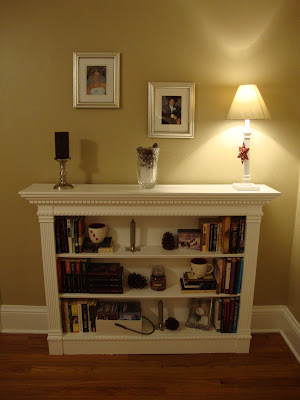 On top of the bookcase, I placed a glass vase full of fake "snow" and glittery pine cones, a silver candle holder with a chocolate brown candle, and a white candlestick lamp with a green shade and red snowflake ornament hung around it. 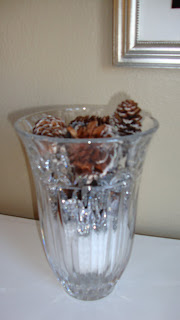 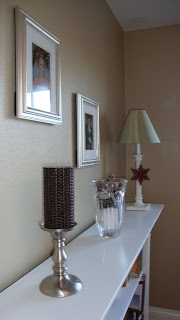 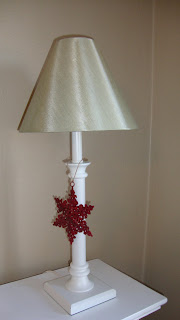 On the shelves of the bookcase, I stacked books of different sizes in several arrangements. Some I stacked laying down to serve as bookends for the books that were standing up. I also had a white box of some CDs I sat on the bottom shelf, and it also served as a bookend.

In addition to the books, I added some accessories to pretty up the space. I stuck to a mostly red, white, green, and brown color scheme - like the colors I used on top of the bookcase.

My mom recently bought me 2 pretty white mugs with red holly berries on them - I sat those on 2 of the stacks of books. In addition, I had 2 silver snowflake-shaped candle holders which I put green candles in and placed on the shelves too. A few other odds and ends included a red jar candle, a bridal portrait of myself on the bottom shelf in a pretty silver frame, and on the top shelf, a little box that has a winter picture of children sledding. The last thing I added were some large brown pine cones - 1 on each shelf. 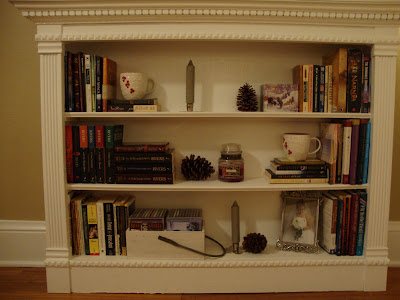 In addition to the bookcase, I wanted to add some fun winter decor to our windows (which are currently curtain-less due to time and budget constraints). I hung 3 red metal snowflake ornaments (same ornament that's on the lamp above) in front of the white windows. It adds some color and looks really pretty when the light shines through them. I bought these red ornaments this past weekend at Walmart for just $2 a piece! 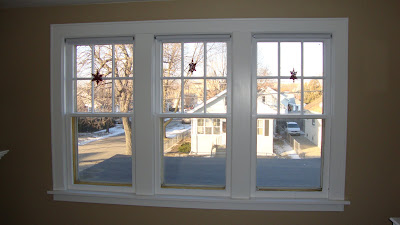 I hung the ornaments with clear fishing line and flat thumb tacks. I hammered the tacks into the top of the window trim so that you wouldn't see the tacks while they were in, nor the holes they might leave behind when I pull them out. The fishing line is practically invisible unless you get right next to it. 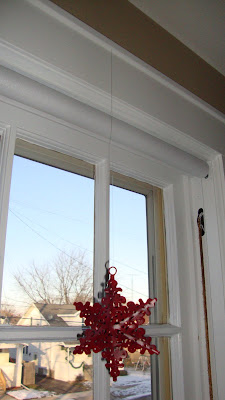 Here is a wider view of the room with the bookcase in place and the snowflakes in the window. I think I want to stick to a red, green, brown, and white color scheme in here for fall and winter. And then in the spring and summer, I may swap out the red for more of a robin's egg blue to create a blue, green, tan, and white color scheme. Should be simple of enough! 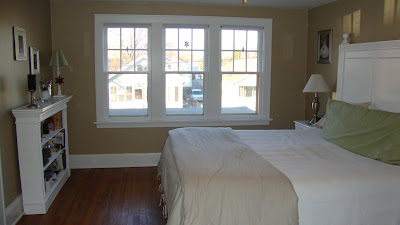 At night, the red snowflakes really stand out against the simple white shades we are currently using. And the lamp on the bookcase gives off a nice soft glow. Maybe this will encourage me to snuggle in bed and actually take time to read one of the books on the shelf! 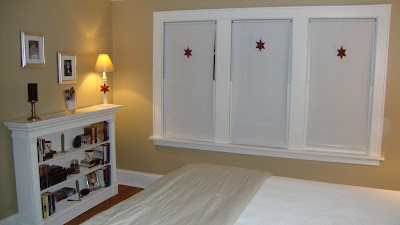 I love our bedroom even more than I did before. It's so warm and cozy. And I intend to leave it set up this way at least through January!