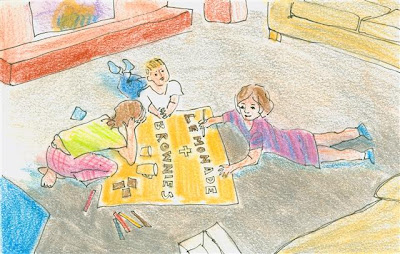 Here are three wonderful children coloring the sign for their upcoming lemonade stand. They happen to be our grandchildren. 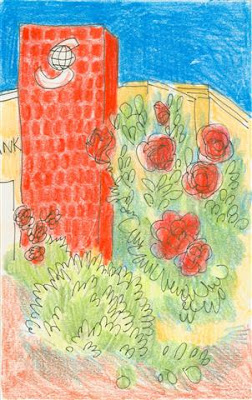 I turned the corner and this color combination just smacked me in the eye. It is the red tiles of the Scotia Bank building in Edmonton, Canada. And the yellow brick, lush red roses, and prairie sky.

As I was standing there, I started to muse on the wonderful abilities of plants to adapt to differing climates. How is it that a rose can thrive in cool damp England (where we lived for 3 years), and Maryland (30 years: humid in summer and sometimes cold in winter) to Edmonton which is hot, dry, and cold. I have wondered this same thought in Arizona. One of nature’s miracles. 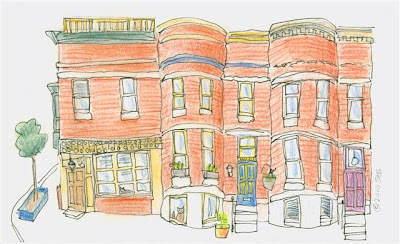 North Lakewood Avenue in Baltimore, one block north of Patterson Park. All these rowhouses were built by the same builder about 1900. They are brick with marble trim and steps. Our daughter and son-in-law own the house on the corner. The yellow pressed tin is original decor, while the interior and the roof deck are contemporary. There's a great view from the roof!

Their house was once a store for the Catholic school and church across the street. The family lived in the top floor. Many street corners in Baltimore were occupied by small neighborhood stores. Some still are, and many have become homes, often a bit larger than others on the street. 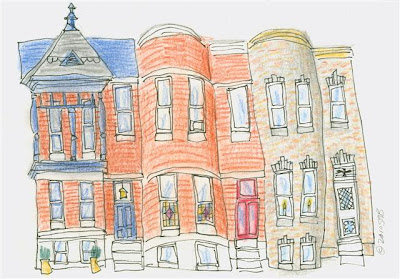 And here are the next four houses on the street. I have been wanting to draw the blue balcony for quite a while. There are three or four more of these balconies in the block. You have to look at a whole line of rowhouses to understand what the architect had in mind. It is all a repeating pattern, and you can see the original, unifying theme as you look down the street. Sometimes you have to close your eyes and visualize what that theme was intended to be, as parts often have fallen off and were not replaced, replaced poorly, or simply covered up. They all once had dentil molding along the roof lines, for example. I haven’t seen another block with quite like this. Even the houses across the street have a different theme.
The house on the far right is now covered in Formstone. It is a facing made of tinted concrete, and is attached to the bricks. It even covers the marble! The surface is marked with indentations to resemble stones. Done in the 1940s and 50s, it was quite a fashionable thing to do and addressed a not uncommon problem of porous brick.

The hot competition among companies in the trade served as inspiration for Barry Levinson’s 1987 movie Tin Men, though Levinson apparently figured that the aluminum siding wars of the 50s and 60s would have broader appeal and recognition than wars involving something so localized as Formstone.

Many people now remove the Formstone, some with adequate results but many with damage to bricks, marble, and even structure. We ourselves own a corner rowhouse covered in Formstone. We didn’t put it there, but we have no plans to remove it. It’s part of the quirkiness of Baltimore (Bawlmer). It’s even the name of a recently introduced local microbrew ale! 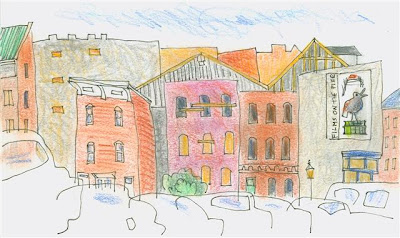 This is Fells Point, at the corner of Broadway and Thames in Baltimore. It is pronounced ‘thames’, not the British ‘temz’.

The sign with the raven is for an outdoor film series. The raven is one of the symbols of Baltimore, because the short story writer and poet Edgar Allen Poe lived and worked here, and died here. The Ravens is the city’s football team.
The buildings are being gutted and rebuilt to become part of the lovely Admiral Fell Inn across the street. Here we have a view of the same corner buildings, looking in the other direction. I drew from the corner door of the Admiral Fell Inn, under the shade of the turquoise umbrella. It was a very warm day, actually too warm to be out sitting at the sidewalk cafe. I believe the large brick building in the background was a customs house. The man on the canvas flag is probably Admiral Fell. 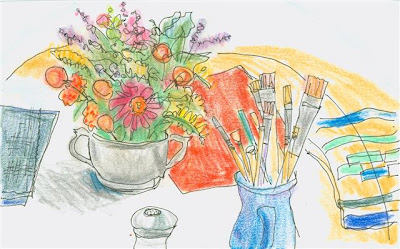 I bought this bouquet at the New London Garden Club antique show. The container is an old and dented pewter sugar bowl. 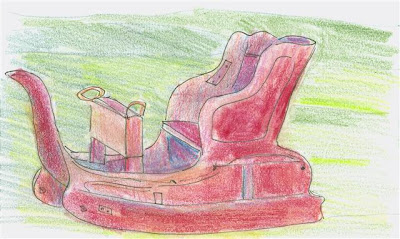 Many times I think about what I will draw in advance. Other times I drive past, look, slam on the brakes, hop out, and draw on the fly. This is because I feel that whatever it is I am attracted to will soon disappear.

This wooden object seems to be a sled or sleigh, for snow or ice. It seats two people.
Our neighbors who run the inn at the bottom of the hill were cleaning out their barn, and I saw this in their yard. There may well be one of these in everyone’s barn. I was struck by how soon the familiar becomes the mysterious. I need to talk to an older generation. 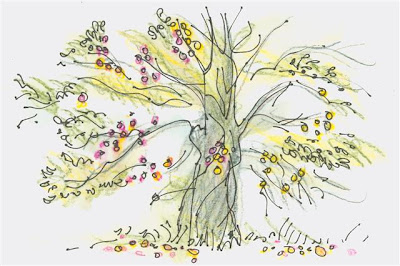 This very old, twisted apple tree produces both yellow apples and red ones. I like its gnarled shape suggesting advanced age—but the abundance of fruit! 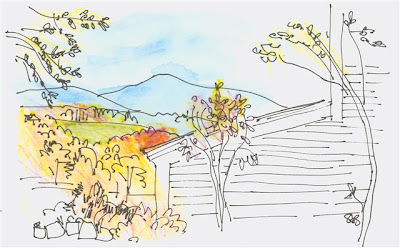 I call this drawing ‘A Peek At The Peak’. Our town’s main street (Main Street) follows along a mountain ridge. You glimpse hazy-blue mountains on all sides as you drive or walk down the street. I love having a vista and miss it when I am not here. This is Mount Sunapee, which has ski trails on it and a resort.